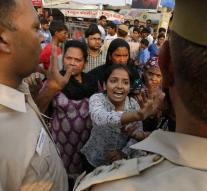 - Two boys were arrested on suspicion of raping a girl aged 2.5 years. The newspaper Hindustan Times reported Sunday that the boys were about 17 years old and acquaintances of relatives of the raped girl.

The boys live in the same district as their victim. The girl was Friday night near her home in western New Delhi kidnapped and raped .

Two hours after her disappearance , she was maimed found behind a bush in a nearby jungle . The Delhi Commission for Women ( DCW ) was shocked by the news.