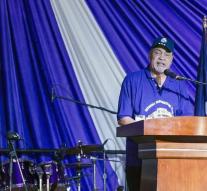 paramaribo - Surinamese president Desi Bouterse will reconsider his decision to dismiss the highest boss of the Public Prosecutor's Office (OM). According to Starnieuws, Bouterse Monday evening had consulted with this attorney general.

A statement from the Cabinet states that the two had 'a constructive conversation'. And even though there is a difference of opinion, the president has taken the decision to consider the situation in question. '

The prosecutor-general is accused of 'serious misconduct,' writes Starnieuws. Apparently, the reason for raising the trust is the 20-year-old crimes that demanded Bouterse at the end of June for his involvement in the infamous December killings in 1982.

The possible dismissal of the attorney general led to indignant reactions in the country. The members of the OM asked the president earlier that Monday to review the decision 'to prevent further violation of the rule of law. '

The Surinamese Order of Lawyers (SOVA) stated that neither the Surinamese government nor President Bouterse could dismiss the Attorney General. Indeed, the boss of the OM is appointed for life. And that must guarantee that the OM remains independent.

The lawyer of the survivors of the December killings and the opposition parties also neglected the decision. The bishop of Paramaribo responded with 'great concern' to accusation to the attorney general that he would have shown 'misconduct' just because it had expressed the penalty for Bouterse.