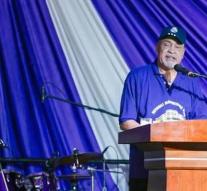 paramaribo - Surinamese president Desi Bouterse will start working again at the end of October. That announced Bouterse in an interview on the state radio.

On September 28, Bouterse transferred his duties to Vice President Ashwin Adhin. He did so on the advice of his doctors who prescribed him after an operative procedure he had undergone in Cuba. It is not known what surgery he has undergone.

In the interview following the 72th anniversary of the head of state, Bouterse outlined a positive image of the country. According to him, Suriname is in the interest of many investors. He called Suriname a 'blessed' country because there are no major natural disasters. He called his countrymen to be less negative, even though the financial crisis is not over yet and many Surinamese have difficulty.