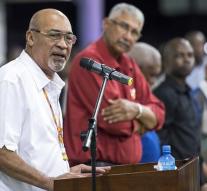 paramaribo - Desi Bouterse will not lay down for a possible conviction for his involvement in the December killings. 'God made me president, so a judge of the war council does not get me out of here.'

The president of Suriname said at a meeting of his political party NDP, against his backbone. On Wednesday, the public prosecutor with a 20-year punishment issued unconditional cell punishment for his role in the so-called murders of 1982. Fort Zeelandia killed fifteen opponents of Bouterses military regime at the time.

'We do not want chaos absolutely, but we will come up with an appropriate response,' said Bouterse. Within a few days he will announce what measures are being taken.