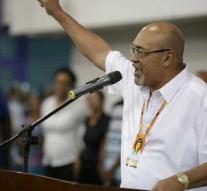 paramaribo - Desi Bouterse, chief suspect in the 8 December trial, will have the opportunity to speak on Monday during a court session. Thereafter, the handling of the criminal case is closed against him. Whether he will use this right to the last word is not known. In the past eighteen years in which the Surinam court of martial law dealt with this case, Bouterse has never been personally present. He was always represented by his lawyer.

Besides Bouterse, the suspects Jimmy Stolk and Etienne Boerenveen also get the right to the last word. The Public Prosecution Service (OM) has demanded twenty years in prison against Bouterse and Boerenveen, and acquittal has been filed for Stolk. These suspects and 22 others are on trial because of the suspicion of involvement in the murder of fifteen prominent Surinamese and Bouterse opponents, in December 1982. Of the 25 suspects, 5 have died in recent years.