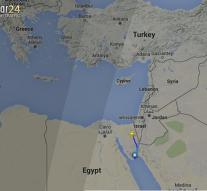 - Egyptian rescue workers have one of the black boxes found on the Russian plane that crashed Saturday in northern Sinai. Also, more than one hundred bodies have been found, reported Russian media. The fragments are not far from the airport found the place Arish.

On board the aircraft were 217 passengers and seven crew members. It is unclear whether there are people survived the crash. Rescue workers say voices heard in the debris. The 18.5- year-old plane, an Airbus A321, was of Russian society Kogalimavia. According to the Egyptian authorities, a technical failure caused the crash.

President Vladimir Putin of Russia on Saturday families of victims of the plane crash in Egypt condolences. Russia is investigating the disaster.

According to the Russian news website Sputnik, the bodies of 17 children who were all found on board the aircraft.