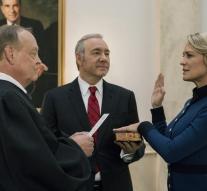 gent - Watching an evening online episodes of a series is not good for the night's rest. The mental excitement that these so-called bingewatches entail causes less sleep. This is evidenced by research by communication scientist Liese Exelmans of Ghent University.

Eight out of ten young adults bingwatches regularly and one in five even several times a week. The study shows that one in three is worse than peers without 'serial addiction'.

Fans of series like Breaking Bad or House of Cards are really involved with the characters and story lines. Because each episode ends with a cliff hanger, the temptation is great to catch another episode.

'The problem is not with sleep time,' says Exelmans. 'The quality of sleep is significantly worse. 'Bingewatcher often finds it difficult to fall asleep and sometimes struggles with fatigue or even insomnia. The advice is to relax after a series marathon. 'Even half an hour can just help watching TV,' said Exelmans. 'But less bingewatches are of course the most efficient solution. '

For the survey, 423 young people between the ages of 18 and 25 were asked about their viewing behavior and sleep quality.