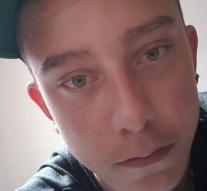 gent - A Belgian couple has started a fundraising campaign for the funeral of the 19-year-old Jordy Brouillard who died last week in a tent in a recreation area in Ghent.

The deceased boy's mother wants to arrange a simple funeral, but want Jef Verbeeck and Véronique Maes for stabbing a stick. The counter their action is now at 8,500 euros.

Jordy was last weekend found dead in his tent after he walked away in an institution. Presumably he died of starvation. The boy lived from childhood in youth institutions and foster homes. His mother left to Belgian media that she could not care for her son because of heart problems.


The Flemish couple that the action has started, never knew Jordy, but could not stomach that he would be buried in silence.,, After we failed first all as a society- by not helping him after he disappeared after leaving the youth institution- we would him cremated as found mutt, 'says an excited Jef Verbeeck in Het Laatste Nieuws.

Jordy's mother said he was not guilty of the death of her son, something strangers blame her indeed. 'Jordy has itself chosen to end this way. He just did not accept help. '