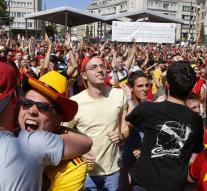 st.petersburg - In Belgium, the winners in the 'comfort final' of the World Cup were proudly reacted. The team has conquered many football hearts, so our southern neighbors realize. The golden generation became the bronze generation- and it was okay.

'Bronze is coming home', writes Brent Jacobs. 'Thanks for the fantastic World Cup', writes the VRT, just like other media lyrical. 'Just take a moment, lay down in the grass, look at the sky and say to yourself: bronze at the World Cup', someone reacts on Twitter, who expresses the disbelief- despite the great amount of footballers- beautiful.

'Bronze it is, but for me this team remains Gold! Thank you red devils ', according to MP Meyrem Almaci. Several politicians join in. 'Bronze is a bit like gold this time. Until tomorrow in Brussels, our country is proud of you ', says a member of Groen. 'Bronze is the new gold', Sp. a'er Rob Beenders.