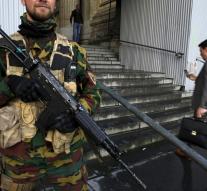 brussels - Belgium will deploy more troops to monitor, among other buildings. There are three hundred additional soldiers freed on top of the 220 ​​already being deployed. The soldiers will mainly deployed in major cities, Prime Minister Charles Michel said Tuesday.

The decision was taken after the threat level in Belgium was increased from two to three. That is the second highest level and means that the threat of an attack in Belgium " possible and probable " is.

The police then defense asked for additional support. The deployment of troops lit the police, which may tend to create more focus on their own tasks.

There are strong suspicions that the internationally wanted Abdeslam Salah, one of the suspected perpetrators of the attacks in Paris, managed to escape after terror act and is located in Brussels.