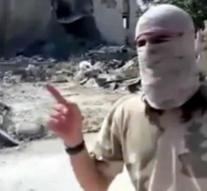 brussels - One to Belgium returned Syriëstrijder demanded 100,000 euros from the Belgian State because it can not be analyzed his psychological state. That report Flemish media Friday.

Hakim Elouassaki from Vilvoorde returned in April 2014 severely wounded back from Syria. The 23 year old had a piece of shrapnel in his head and became partially paralyzed.

He should stand trial last September in the so-called Sharia4Belgium process, but the judge ruled that he must first be observed to determine whether he was sane. Such observation according to psychiatrists is only possible in a specialized clinic. Which Belgium has not, although the law does provide for it since 1964.

The defense of the accused has now filed a damages. " We demand 100 000 euros in moral damages and a penalty of 2,500 euros per day for each day that the Belgian State fails to comply with the law and a monitoring center to be set up. Surely it can not be that no one wants and can comment on the insanity of my client. "