Home / World / Belgian reactor Tihange one does it again 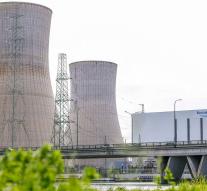 - The Belgian reactor Tihange 1, located on the River Meuse between Namur and Liège, Saturday is rebooted. This has involved the electricity company Electrabel announced Saturday. Tihange 1 was shut down Friday after there had been a fire in the non-nuclear part of the plant.

Electrabel has shut down in the night of Thursday to Friday the Doel 3 nuclear reactor in Antwerp because of a water leak. There was in the non-nuclear section, a small leakage to a pipe with water having a high temperature to the steam generators. For the repair was necessary to link the center of the network, said spokeswoman. The central being held to Electrabel in 'hot shutdown'. It is not known when the plant is running again at full speed.