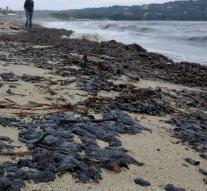 st.tropez - Ten days after the collision between two cargo ships in the Mediterranean near Corsica, oil run away washed ashore on southern French beaches. The smeerboel ended up in Saint-Tropez and two neighboring municipalities. That is what the Prefect of Toulon said on Tuesday. It is an area of ​​16 kilometers long.

A contingency plan has come into effect for cleaning up the oil residue, mixed with seaweed. The population is called upon not to go to work themselves, but to inform the authorities of the contaminated sites.

Among other things, the beach of Pampelonne is affected. That became world famous for the film 'Et Dieu... créa la femme '(And God... created the woman) with Brigitte Bardot. Due to the bad weather there are currently few tourists in the region.

After the collision between a car transport ship and a container ship, the French and Italian navies were able to suck up and pump up much leaked fuel oil, but not everything.