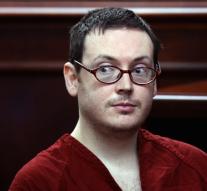 denver - James Holmes, the man who in 2012 in a movie theater in the United States Aurora, near Denver, twelve people shot dead, was transferred to another prison. In this new facility, he gets more contact with fellow prisoners.

His new home is about 160 kilometers from Denver, in Colorado. The prison specializes in housing prisoners with mental health problems. Holmes is still regarded as a security risk. According to his lawyer, he was mentally ill and he suffers from schizophrenia.

In October he was attacked in his previous jail by another inmate. Holmes was unharmed.

The man was in August a life sentence for the carnage he caused during the premiere of a Batman movie. He escaped the death penalty because the members of the court the jury could not agree on that. Unanimity of the nine judges was required.