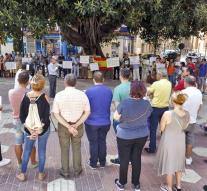 barcelona - Barcelona stands for a massive manifestation, under the motto: 'no tinc por', I'm not afraid.

The march will end at Placa de Catalunya, near the place where the white bus making so many victims sprinkled the Ramblas nine days ago. In addition to many politicians and mayors, the Spanish king also accompanies. It is the first time a Spanish king participates with a manifestation.

Ada Colau asked yesterday 'not only from Barcelona and Catalonia, but from all over the country' to participate in the demonstration. Thousands of people are expected. Joshua Deen from The Hague is also thinking about going. He sits on his fixed spot on the Ramblas, where he has been for eight months. For him there are four cups, where passers can throw money- where there are signs: 'Food', 'Weed', 'LSD' and 'Hostal'.

Nine days ago he was sitting here as he suddenly saw a white carriage of zigzagend dozens of Ramblas visitors. He is still watching the events. 'I've been crying for eight days. It was horrible: suddenly they freaked out with a van on the Ramblas. I had a mazzel that I was in this corner. But everyone suddenly burned in panic, blooming bodies everywhere. I went running, I took eight miles, and then I slept in the lobby of a bank. But now I'm afraid of sitting here. And every time I walk over the Ramblas and see the monuments for the victims, I have to cry again. I would like to go to the show this afternoon. Let's see if that's going to happen. At least I'm glad they caught those bastards. '

The manifestation begins at six o'clock. From the Jardines de Grácia are expected to descend tens of thousands of people to Placa Catalunya. A group of members of the Catalan police, shopkeepers and neighbors of the Ramblas is ahead. Also, there are the owners of hotels where the many dozens of tourists who hit the Ramblas- and taxi drivers who carried wounds were walking. King Felipe VI follows a second group, like the Catalan and Spanish premiers Puigdemont and Rajoy, other politicians and mayor Ada Colau.

In Cambrils was a similar demonstration yesterday. There were 16,000 people joined. Instead, five members of the same terror cell tried to attack another ten hours after the attack on the Ramblas. They could kill one woman and six people were injured before the police shot dead the five terrorists.

No tinc por: 'I'm not afraid'. This is true of many people in Barcelona, ​​but there are also those who are afraid of it. Like Rajae who lives in Barcelona, ​​and comes from Morocco. She drinks coffee on a terrace. 'I feel that people look at me differently, it's as though they only see my headscarf- and think I'm an extremist. I feel the hate that frightens me. But a Muslim is not an extremist yet. I hope people will see that. '

Danny, who is next to her, says, 'We should not let ourselves go crazy. And do not let us divide. Yes, I will certainly demonstrate. We must show that we condemn terrorism, and that peace and love will overcome. 'He takes Rajae's hand. 'Together we have to do it!'

Max Rubiras, who sells on the Boqería oysters, also goes to the demonstration. 'I still get chicken skin when I remember the day of the attack. This is also because the perpetrator alongside our oyster bar ran the boqueria along with all the people who fled. When all those people were in panic, my colleague Jerome walked on the terrace. He was completely under the foot, was taken by the flow of people- and ended up in the Boqueria. He lost his shoes and sprained his ankle, he still can not walk. I still see his fearful eye when he was taken by the people. The worst of the attack I find: the perpetrators were boys like me. They soccered, they went to school were happy. They lived in a beautiful village.... When did it go wrong in their minds? '

'What I really like: it gives more fascists and superiors more food. A mosque was attacked in Granada during the week. Those kinds of things scare me, 'Max continues. 'Jerome is also Moroccan- but he is not a Muslim. I was still with him today, it's not so good with him. He is afraid he is being looked at. I hope we do not make ourselves mad- that there is no big divorce in the city. To prevent that, I also want to go along. We are also strong, together we can show: we do not want to! '