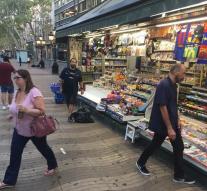 barcelona - One day after the bloody attack on the Ramblas in Barcelona, ​​the famous street is again released by the police. Normal life is slowly starting. Residents of Barcelona take the metro to their work. At the entrance of the world-famous street are many police officers.

Some stores are reopened, other businesses close their boutique.

'Yes we saw the bus ride by,' says a man at a flower stall shortly. He wipes up garbage around his shop, closes the doors and walks away.

At twelve o'clock this afternoon, there will be a minute of silence at Placa Catalunya, near where the attack was committed on Thursday afternoon. A bus drove 13 people dead. Dozens were injured.