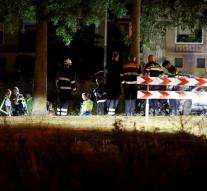 finish - In an accident in Eindhoven, a motorist died in the night of Sunday on Monday and two other occupants were injured. The car collided with a crash by the police against a tree.

The police in the Brabant city investigate the accident, with the car with Belgian license plate disappeared after a police stop sign. The police drove the chase on which the motorist drove on a highway vent against a tree.