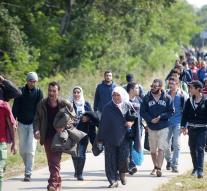 - The Austrian police have broken up a human trafficking gang that between February and mid-September, an estimated 1800 migrants via Serbia and Hungary has brought to Vienna. The gang would have expected from Belgrade are guided and per person between 250 and 300 euros for the illegal trip.

The police announced Thursday that eleven suspects were arrested in Austria. Against six other defendants international arrest warrants have been issued. The leader of the gang was among those arrested, said Interior Minister Johanna Mikl- Leitner, Thursday against the press.

Most people who came to the gang allegedly smuggled from Syria and Afghanistan. They were in groups of ten to fifteen people in vans or minibuses crammed and transported.