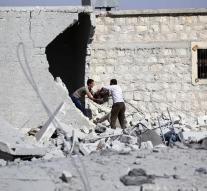 zurich - The Syrian army must expel the terrorist rebels in the city of Aleppo. Only civilians can be protected in this way. 'That is our constitutional mandate to protect the people.'

Said that President Assad of Syria in an interview with Swiss television SRF.

'We must get rid of these terrorists in Aleppo. The only way we can protect our citizens. They are controlled by the terrorists and killed, 'said Assad. The president said he can not wait to sit down and watch. 'We have to attack, that is clear. '