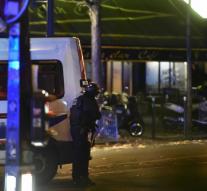 - The perpetrators of the attacks in Paris have had contact with members of Islamic State (IS) in Syria. So say sources at the American newspaper The New York Times.

The contact would have occurred before the attacks. This indicates, according to the newspaper that the terror group may have helped to coordinate and carry out the attacks, and has inspired not only the perpetrators. IS has the attacks Saturday claimed in a video message.