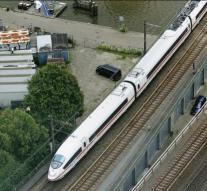 bern - A 34-year-old woman who was attacked Saturday in a train in Switzerland, succumbed to her injuries. Reported that the Swiss police Sunday.

A 27-year-old Swiss fell Saturday afternoon in the train passengers with a knife and poured a flammable liquid over a woman. It is not clear whether the woman is the one who is deceased.

There were seven wounded, including the perpetrator and a six year old child. The police have no evidence that this was a terrorist act.