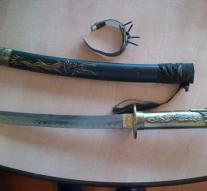 - A fifty Austrian has a samurai sword hacked at his neighbor. The reason: he wanted his cell phone back, he had stowed with the victim. The 25-year-old victim suffered multiple stab wounds, the perpetrator was arrested. He seemed drunk. In his house officers found several swords and a machete.

The police of the city of Linz on Thursday reported Friday that the man had knocked at his neighbor. When they refused to give the cell phone, he went away. A moment later he came back with a 50 centimeter long samurai sword and began to pull out. When he got his phone yet, he left.

The victim knocked bleeding with other neighbors for help, but nobody answered. On the street he tried to stop cars, but everyone rode by. Finally called the offender himself the emergency services.