Home / World / Attack on Raqqa begins within a few days 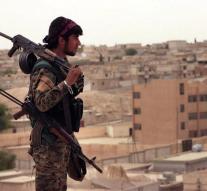 raqqa - Syrian militias begin a military operation within a few days to conquer the city of Raqqa on Islamic State (IS). A spokeswoman for the Kurdish YPG militia announced Saturday that Raqqa has gained huge land profit and that the coalition against IS has now reached the outskirts of Raqqa.

The offensive against the bulwark of IS is carried out by the Syrian Democratic Armed Forces (SDF). It consists of Kurdish and Syrian militias. The YPG is the main power.

Until great dissatisfaction with Turkey, the United States supports the YPG. Ankara sees the militia as an extension of the forbidden Kurdish PKK movement. Turkish president Recep Tayyip Erdogan recently asked Washington to refrain from arms deliveries to the 'terrorist organization. '