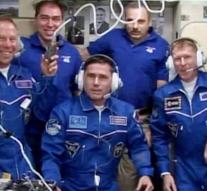 Peake, astronaut of the European Space Agency, is only the second Briton ever to go into space. Helen Sharman was the first in 1991. During his stay Peake will join the space in the London Marathon. He runs on the treadmill, with London images for themselves on an iPad. He also participates in dozens of research experiments. For example, he wants to grow crystals in the blood vessels and the space and activity mapping in parts of the brains. Peake also participates in a large educational program to inspire children and students. He's going to give lessons from space to trot as a lecturer.

It is intended that the astronauts continue to half a year in the space station.