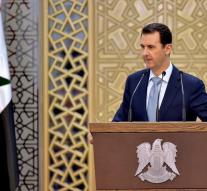 damascus - Syrian President Bashar al-Assad says the United States and Saudi Arabia want " terrorist groups " to participate in peace talks and that no one in Syria accepts such negotiations. He said in an interview with state media published Friday.

" When they want to change their approach and give their weaponry, we are ready. But to negotiate with them as a political entity, which is something that we categorically reject. " Assad citing the conversations taking place this week in the Saudi capital Riyadh, where various opposition parties to sit around the table.