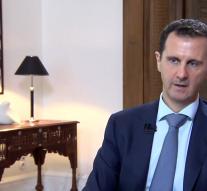 london - Syrian President Bashar al-Assad says that the bombing of foreign powers on terror group Islamic State (ISIS) have the opposite effect. "This type of operation is like partially cutting out the cancer. Therefore, it will just spread quickly through the body," Assad said in an interview with The Sunday Times. He thus responds to the recent first actions of the RAF against ISIS in his country.

The House of Commons in London went last week agreed with airstrikes on targets in Syria ISIS. Several hours after warplanes attacked oil fields that would be under the control of ISIS. According to Assad, however, doomed the British strategy. Although Syria and Britain in ISIS have a common enemy, they are not friends. British Prime Minister David Cameron would prefer that Assad cleans the field and the " moderate opposition " given a place in government.