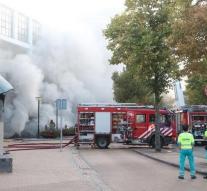 groningen - Asbestos has been found around the burned premises of Holland Casino in Groningen. The municipality announced that Tuesday. Several neighborhood residents who have stayed at a hotel since Sunday's fire have decided not to return home, because of this finding, a spokeswoman said.

Mayor Peter de Oudsten has informed about thirty people Monday evening in a hotel in the city. The municipality does not think there are any health hazards. 'The residents were allowed home, but it was up to them to judge if they wanted to. There were people who preferred to stay in the hotel. Some may also have smoke damage, 'said the spokesman.

The elders give an explanation of the finding on Tuesday. He does that together with the fire department and the GGD.