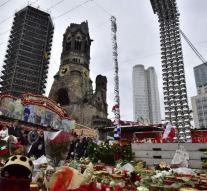 tunis - Tunisia has arrested three people who would have been in contact with the Tunisian Anis Amri, the presumed perpetrator of the bloody attack Monday on the Christmas market in Berlin. This was announced by the Tunisian authorities, according to various German media Saturday.

Among those arrested were a cousin of Amri. Amri in the night from Thursday to Friday shot dead in Milan. The attack came twelve people dead.