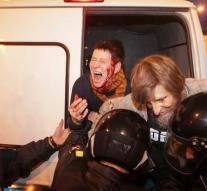 st.petersburg - The St Petersburg police arrested Saturday night at a major protest against President Vladimir Putin. According to media, many arrests have been made. The reported numbers of detainees differ from one another. The newspaper Novaja Gazeta spoke of more than one hundred arrests.

Russian opposition leader Aleksej Navalvi has called on Putin's 65th birthday to take charges for protests against his government. There have been protests against Putin throughout the country. Opposition leader Navalni did not attend because he got stuck. He was sentenced to twenty days cell phone last Monday because of the call for forbidden demonstration. From other places including the capital Moscow, mostly calm demonstrations with hardly any arrests have been reported.

Putin followed as leader of Russia at the end of 1999 Boris Yeltsin. He is now in his third term of office as president. He was prime minister from 2008 to 2012.