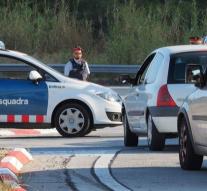 barcelona - Eyewitnesses report that they saw Saturday night at the border between Spain and France how polar-equipped police officers surrounded a bus and hit three occupants.

The witnesses who reported to The Telegraph were in a Dutch coach on a return trip after a Spanish holiday. The message has not been confirmed by the police yet. The arrests may be linked to the attacks in Barcelona and Cambrils.