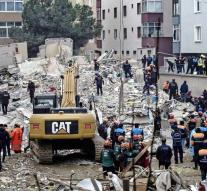 istanbul - The Turkish police have arrested four people in connection with the collapse of an apartment in Istanbul that killed 21 people. Among the detainees is a building inspector of the...

The arrested persons are charged with manslaughter by negligence. The governor of Istanbul and the Minister for the Environment and Urban Expansion have since declared that the three upper floors of the building were added without permission.

After the disaster, apartment buildings were cleared in Istanbul and other cities. Building additional storeys without permission is a problem in Istanbul. Because the city is located in an earthquake area, that practice is extra dangerous.