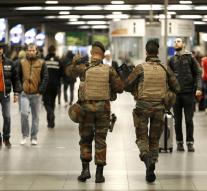 brussels - The arrest of a man in Brussels, Friday night, there the reason for tonight was the threat level in the Belgian capital increase to the highest level.

This was reported by the French-speaking broadcaster RTBF according to a source close to the investigation. Upon search of the home of the man in terror municipality of Molenbeek, three or four weapons would be found. In a van would be found two weapons.

The newspaper Le Soir speaks of ' chemicals and explosives. That would make multiple perpetrators attacks on shopping centers, public transport and major events, the OCAM, which determines the threat level. Police have not yet responded to the news of the arrest.

Whether the arrested man is Abdeslam Salah who is on the run after 'Paris' is unknown.