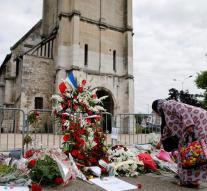 toulouse - When investigating the murder of the priest Jacques Hamel is a 21-year-old man arrested in the southern French Toulouse. The channel BFMTV reported Wednesday that the man had telephone contact with the two Islamic terrorists mental late July brought to life.

The man is Monday for the first time questioned and is still in custody. The priest was kidnapped along with four others in a church in Saint-Étienne-du-Rouvray, just south of Rouen. The terrorists cut the priest's throat. Another hostage was seriously injured.

The two perpetrators, who claimed to act on behalf of terrorist group Islamic State (IS), were shot dead by police.