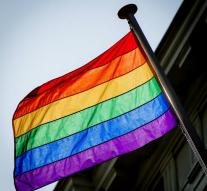 cairo - The Egyptian police arrested seven people who had taken a rainbow flag to a rock concert. Sources within security services say the group is suspected of promoting 'sexually abusive behavior', a euphemism for homosexuality.

The arrests took place after a concert of the Lebanese rock group Mashrou 'Leila, whose singer is openly homosexual. Camera images showed that the suspects held up the rainbow flag, say the sources.

Egyptians can not, in principle, be prosecuted for their nature. Nevertheless, in the conservative country, homosexuals are regularly arrested on suspicions of blasphemy or immoral behavior, for example. It is still unclear whether the seven arrested concert goers are being prosecuted