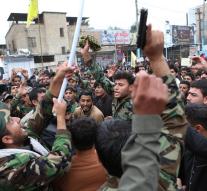 - The deployment of troops in Iraq by Turkey is a violation of international law. That the Secretary General of the Arab League declared Thursday.

The Turkish advance is a flagrant violation of international law , said Nabil al-Arabi during a meeting of foreign ministers of the League in Cairo. Iraq demanded during the meeting yet again the full withdrawal of Turkish troops according to Ankara in northern Iraq soldiers from that country to train against Islamic State (IS) fight.

Turkey earlier this month sent hundreds of soldiers to the military base in Mosul Bashiqa. That would be done at the request of Iraq but Baghdad say they know nothing. Turkey announced last weekend to get back to the military, but that seems not to have happened.