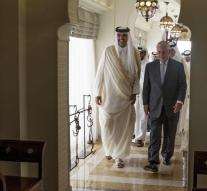 cairo - Foreign Ministers of the four Arab countries who are involved with Qatar in a conflict come together on Wednesday. Saudi Arabia, United Arab Emirates (UAE), Egypt and Bahrain speak in the Saudi city of Jeddah on the issue, Egypt's minister said Tuesday. Rex Tillerson, the US Secretary of State, is also present.

The United States fears a stalemate in the conflict between Qatar and the other Gulf States. Saudi Arabia, UAE, Egypt and Bahrain broke the economic and diplomatic ties with Qatar a month ago. They blame the Gulf State for support to extremists and close ties with Shiite Iran.