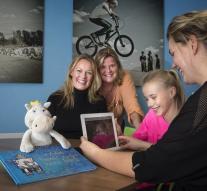 Young naughty pig warts Obbe is protagonist in the adventures of children's author Ingeborg Kuys from Enschede. Caring app- built by the creators of cartoon SpongeBob- is launched today.

The 'spiritual mother' of Obbe expert's experience since they already seventeen years suffering from bowel disease ulcerative colitis. She made a virtue of necessity to continue writing children's books, 'I know better than anyone how important it is that patients are well informed. Especially when it comes to children. '

Parents of patients 5 to 12 years to be included or surgery, the app can be downloaded via a link and then follow the fortunes of Obbe along with their children through laptop, PC or tablet. The pig all kinds of adventures in which children identify. 'For now it is abdominal pain. Complete with splash poo and loud bangs. But it is already working on animations where other diseases are central, 'says Kuys.

The app starts with a detailed questionnaire, in which each Obbe resurfacing. 'There are medically relevant questions among which sometimes you do just need to dig into your memory,' said pediatrician Thalia Hummel. 'Whether example, prevent certain diseases in the family. It is during these conversations quite often that even grandma to be called. Parents can fill that list is now at home in peace. Thus, we gain valuable time. '

Through the app gives cartoon character Obbe then a lot of information on issues such as anesthesia and the disease itself.\n  \n  \n   advertisement

'It is very important that children are well informed,' said pediatrician Hummel. 'It takes a bit of fear. Such an application had long been top of our wishlist. Fellow pediatricians have much interest. '