Home / World / Another 54 people in hospital after attacks 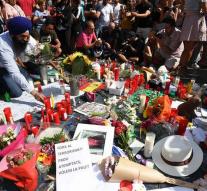 barcelona - Fifty wounded in the hospital as a result of the attacks in Barcelona. Twelve of them are in critical condition.

Four people are in Cambrils in the hospital after the attack there. One of them has serious injuries, according to the emergency services Saturday on Twitter. It's mostly about tourists.