Home / World / Almost all of Tajikistan without electricity 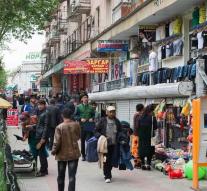 dushanbe - Almost all of Tajikistan Friday sat for hours without power. That was due in accordance with the national energy company to a failure in the hydroelectric Noerek. This is in the former Soviet republic, with over 8 million inhabitants, accounting for 75 percent of electricity production.

The aluminum plant Talco, the largest energy consumer but a goldmine of hard currency, fears have been seriously damaged. In Dushanbe, the capital of the impoverished country on the border with Afghanistan, it was about four hours dark. Even the traffic lights were not functioning. Sparsely, neighborhood by neighborhood, the power came back on track.

Tajikistan wants precisely this weekend to give the go-ahead for the construction of the new power station to Lake Rogoen. The Italian company Salini Impregilo, which may realize for more than 3.5 billion euros.