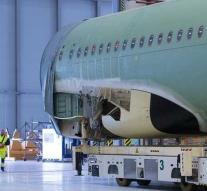 toulouse - Aircraft manufacturer Airbus wants to scrap 3600 jobs because fewer aircraft are ordered, especially the Airbus A380 and military transport aircraft of the A400M type. This was reported by the French magazine Challenges.

The company will talk to the European Works Council on Wednesday. Airbus confirmed that on Saturday, but only gives more information about the plans afterwards. According to Challenges, the jobs would be lost outside French establishments, particularly in Augsburg, Bremen, Filton (England) and Seville.

Airbus is expected to show in the negotiations that jobs can also be transferred to another location instead of being canceled. For example, people and equipment used for the construction of the A380 are already being used for the production of aircraft that sell well, such as the A320 and A350. Factory spaces in Toulouse where the giant A380 was worked, have already changed to a large extent to build the A350.