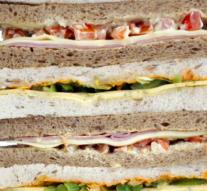 columbus - An embarrassing incident in an American lunchroom. A policeman in the city of Columbus was injured when he unsuspectingly sank his teeth into a bun; the sandwich was found to contain glass shards. Police are investigating whether there is intent on the game, until that time the snack bar is closed.

The agent in the US state of Ohio suffered a deep cut in his mouth and had to spend a night in the hospital. During dinner heard the man suddenly crackling and he noticed immediately that the blood flowed from his mouth.

The roll multiple glass fragments were found. 'But it does not appear that there was intent on the game,' police said in a statement.