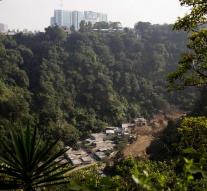 - The Guatemalan authorities warn of new landslides in the area last week The damage caused by landslides. Forty families have had to leave their homes as a precaution.

Guatemala was hit by last week's storm. Boulders, mud, water and trees came from a hill down. An entire neighborhood in Santa Catarina Pinula, not far from the capital, Guatemala City, was wiped out. Certainly 253 people were killed.

Four hundred people are homeless.Rescue workers are still looking for almost four hundred missing. Monday will be decided whether the rescue operation should be suspended because of the risk of new landslides. There runs an official investigation into why houses are built in the affected area. According to a disaster commission in Guatemala years ago was already clear that Santa Catarina Pinula was in a sensitive area.