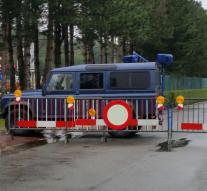 opglabbeek - Near the French city of Nice two suspects were arrested in connection with the murder of the Belgian criminal Silvio Aquino . According to the Flemish newspaper Het Belang van Limburg is one of two the father of a man who died      was found on the motorway in Roermond.

In the case of Aquino are already fixed three suspects , two of whom were Eastern Europeans who were arrested recently in Cologne. Aquinas ( 41 ) was on August 27 with his wife by two cars with four or five men clamp driven on a deserted forest road in Opglabbeek, in Belgian Limburg. The woman was beaten , the man was shot . Later on in the Netherlands the hard shoulder of the A73 at Roermond found the body of one of the possible shooters.