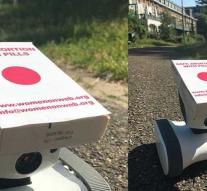 belfast - In the Northern Irish capital of Belfast, the police took short action on Thursday with an action by Women on Waves. The Dutch action group had two robots to distribute abortion pills to women who were outside a courthouse. The robots have been confiscated.

According to Rebecca Gomperts, founder of Women on Waves, the action was not illegal, because the robots were controlled from the Netherlands. She says that three women have taken the pills.

Northern Ireland (part of the United Kingdom) has strict anti-abortion rules. It is only allowed there if the life of women is at stake and illegal abortion is for life. Since neighboring country last Friday voted in a referendum for legalization of termination of pregnancy, there are also voices in Northern Ireland to relax the policy.