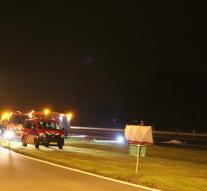 asten - The woman who died Saturday in a traffic accident on the A67 in Asten , was hit by two trucks. A 31 -year-old driver from Milsbeek saw the woman suddenly bicycle crossing the highway. He could not avoid her. A 51 -year-old truck driver from Beek en Donk, who was driving behind the first truck , the woman then also hit .

She died on the spot. Her bike was found in the median . Who the woman is , is not yet known , the police reported Sunday .

The two drivers are caught by the police. For them victims on. The A67 was between Asten and Liessel in the direction of Venlo closed part of the night.