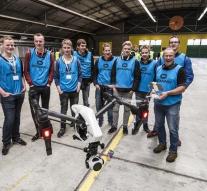 enschede - They want it all to be well; drone pilot. At the ROC van Twente can MBO from next school year following the electives drone technology and drone use.

Yesterday, more than 300 students got a taste and the first 28 enthusiasts were already a pilot theory test. Then they were allowed to practice with the management of real drones and a simulator.

In total there will be room for MBO in 1000 and it is expected that there will be massively subscribed. According to Laurens van Lier, Director of the Vocational College for Transport, Logistics \u0026 amp; Mobility of the ROC, the new elective courses add value to the students when entering the labor market. ' Robot technology not only means jobs disappear, but there will be new jobs- like drone pilot- relax. '

The demand for students who can deal with unmanned systems is expected to increase. The biggest growth of drones will be in infrastructure projects in the security industry, agriculture, telecom, media and entertainment and transportation.

The ROC works with Space53, national test site for drones. The students next school choose one of the two new electives receive weekly three hour lesson in learning to control drones or drone technology.