Home / World / 6 questions about the climate 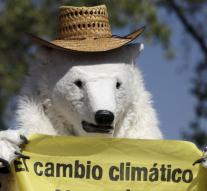 - Monday begins the international climate summit of the United Nations in Paris. Until December 11 will talk about climate change. There are 45,000 people expected.

Where the top is about? The aim is to keep the two-degree increase in global temperatures. Up until now, the Earth since the beginning of the industrial era (around 1850) has increased by 0.7 degrees. In recent years, the temperature seems to rise faster. So that the temperature rise is caused? The climate panel of the United Nations, which include hundreds of scientists are represented, says that 95 percent sure that it is due to the increase in CO2 emissions. That consistency is calculated using models. Critics say the climate is too complex to make such statements. How CO2 is reduced? Preferably by Paris with governments to make binding commitments. That did not work at the summit in Copenhagen. Therefore asked countries themselves to make plans. That most made by far. But now it is already known that these plans are not sufficient to meet the requirements of the climate panel. Also, they are not binding. So it is only the question of what transpires. What are the plans of the Netherlands? Europe has set a goal for the year 2030 40 percent fewer greenhouse gases than in 1990. The government has agreed with this goal. The climate is the only subject of conversation? No, probably it is mostly about money. The developed countries, the developing countries promised to stop 100 billion annually into a fund from which poor countries can finance their climate measures before. The question is whether that pot is full. Many rich countries are afraid that huge sum of money is not used for climate purposes, but disappears into the pockets of those in power. Will the climate save us? According to the environmentalists and leftist political parties is the proverbial five to twelve. They demand drastic measures. If not, they say, the disaster are incalculable: major floods, the disappearance of cities like New York, heat waves, threatening food production and species extinction. Critics point out that the environmental movement has had more wrong. However, they also show that the earth is warming, but do not want hundreds of billions are wasted on expensive climate plans, such as wind turbines at sea. They feel that you can spend hundreds of billions more in eg building dikes in Bangladesh, so that fewer people drowning in the annual floods. The ideas of the environmental movement are embraced widely in the world by politicians and policymakers. Yet it is likely that the environmentalists will not be happy with the end result. The proposed climate measures in their eyes will not go far enough.
NEW