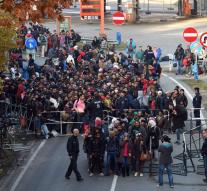 passau - The influx of refugees from the German-Austrian border continues unabated. In the German border towns of Passau and Wegscheid in the night of Wednesday to Thursday nearly 5,000 migrants arrived, said a spokesman of the German federal police in Passau Wednesday night.

The number of buses that refugees in Austria takes you to the limit, especially on Wednesday increased. " In the afternoon there were no problems. Later that day came, one after the other bus. Our Austrian colleagues are just as overwhelmed as we are ", reported the spokesman.

Most of the refugees had to spend hours at the border in the dark and in the cold waiting for further transport to Germany. The police indicated that difficulties arise because a small number of buses is available.

Wegscheid at about 300 refugees were taken to a shelter. An entrepreneur from the neighborhood temporarily held a workshop available.