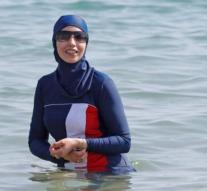 According to the owner of the bath, that money was needed to clean the water. Also, the money was compensation because he had to close the bath for two days.

Other swimmers were immediately asked to leave the swimming pool.

The woman with her Islamic bathing suit refused to pay the fine. The owner then held the money in from the deposit.

Last week, two English women in Burkini were portrayed a Portuguese swimming pool. That was in Albufeira.

Last year there was a relaunch of women in Burkini in France. A judge then ruled that the fines were illegal.