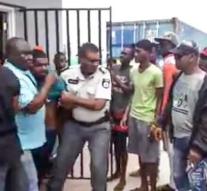 paramaribo - The Surinamese police have arrested thirty suspects in connection with the murder of several fishermen more than a week ago. The Surinamese Minister of Justice and Police Stuart Getrouw announced this during a press conference in Paramaribo.

The investigation into what happened on the Surinamese coast on 27 April is still in full swing. So far, three bodies of murdered fishermen have been salvaged, while five have survived the attack. Twelve passengers are still missing.

The research must also reveal whether the brutal assassinations have to do with a 'war' between different groups of fishermen. Minister Getrouw confirmed that there is indeed a suspicion that 'there is more to it. '